“I’ve been able to lead the advancement of multiple projects at Cummins Inc. I would not have been able to do [that] without the work ethic instilled in me by FIRST. [After graduation] I plan to stay involved with FIRST and give back to the program that has afforded me so many amazing and unforgettable opportunities.”  Ivan Lamb 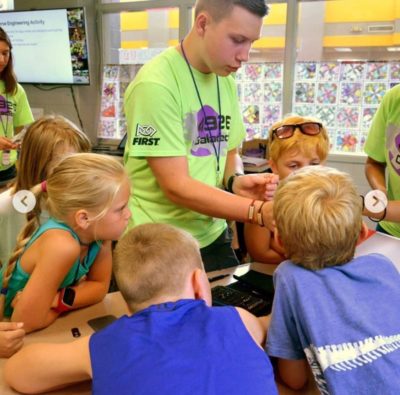 Ivan began his FIRST career on a FIRST LEGO® League (FLL) team based out of St. Peter’s Lutheran School. He participated in FLL throughout 6th and 7th grade before joining FIRST Robotics Competition team #4926, GalacTech. His time as a member of the design team gave him the experience needed to become the fabrication team lead in the summer of 2018.

During this time, Ivan organized the FIRST STEM Summer Camp, an Eagle Scout project encouraging youth participation in STEM. The program later became so popular, it grew to multiple camps – increasing STEM involvement and service in the Columbus community. He also trained his peers on new machines and fabrication techniques back in the shop. These efforts aided in the production of a competition robot that admirably performed during the 2019 season. His contributions earned Ivan a nomination for the Deans List Semi-Finalist Award, which he later won at the 2019 Center Grove District Event.

Now, Ivan serves on the Student Board of Directors for FIRST Indiana Robotics. He is an active Eagle Scout with 6 years of experience in Boy Scouts. And last, but certainly not least, he works as a School-To-Work Mechanical Engineer at Cummins, Inc. His work focuses on Industry 4.0 and process improvement for the company.

“Ivan has taken the lead on introducing 3D printing into our plant. He is also working to get our very first collaborative robot installed […] and is already programming the robot to perform desired tasks. It’s no exaggeration to say that Ivan is contributing at a level on par or better than many newly-degreed engineers. From technical skill, to time management and ability to organize, I know that his experiences with FIRST have contributed to being able to jump in the deep end here at Cummins.” Michael Winner – Manufacturing Engineer, Cummins Inc.

After graduating from high school in 2020, Ivan plans to pursue a degree in Electrical and Computer Engineering at the University of Louisville. Until then, he hopes to inspire his fellow teammates to give back to the community, and help make FIRST a better and more impactful program for years to come.

About the Author: Madison Henderson